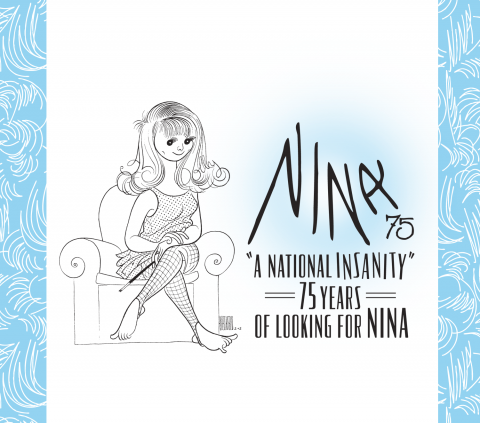 75 years ago, Al Hirschfeld began to hide his daughter's name, NINA, in the designs of his drawings when she was born in 1945.  According to the artist he put it "in folds of sleeves, tousled hairdos, eyebrows, wrinkles, backgrounds, shoelaces —anywhere to make it difficult, but not too difficult, to find." Over the next half century Hirschfeld tried to end what he called "a national insanity," but he "learned, the hard way, to put Nina's name in the drawing before I proudly display my own signature."

Sunday mornings looking for NINAs was a custom shared by New York Times readers, a game played with children and grandchildren. Finding NINAs was an unspoken initiation into the worlds of Broadway, Off-Broadway, and Hollywood. For Hirschfeld, drawing NINAs became second nature, and they appeared spontaneously as he worked, forcing him to count them at the end like everyone else. At a reader’s suggestion in 1960, he began to put a number next to his signature when there were more than one NINA to hunt for.

In this exhibition we have gathered drawings that all touch on some part of NINA history, from the very first drawing to the one with the most NINAs (it is probably not the one you are thinking of). These images will show the different ways he chose to hide it, and what happened when he left it out, or made the foolish mistake of trying to include other names. We wish you happy hunting for NINAs in these works, and the thousands of others we have on our site. 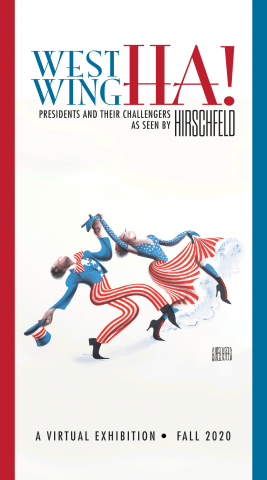 The quadrennial spectacle of the presidential campaign is one of the few shows playing around the country at the moment, and like most theatre it includes heroes and villains, backstage crews, directors, designers and critics, all playing for audiences everywhere. While Al Hirschfeld admitted he did not have the bile needed to be a political commentator, and preferred for writers to pick the good guys and the bad guys, for nine decades he drew virtually every president of his lifetime, and thanks to Broadway and Hollywood, he got to draw a few more.

Now for the first time, we have gathered 25 pieces that document Hirschfeld’s view of the Oval Office occupants from an early sculpture of Abraham Lincoln to a drawing of the popular television show The West Wing more than eighty years later. Hirschfeld drew the President and any challengers in good times and in bad times, in musicals and in dramas, and in thrillers and comedies. Hirschfeld’s presidential drawings earned him two private visits to the White House, artwork on an aircraft carrier, a copy of LBJ’s State of the Union address, and probably played a role is his receiving a National Medal of the Arts (awarded posthumously in 2003 at the White House). No matter what your party, join Hirschfeld on the campaign trail headed to 1600 Pennsylvania Avenue. 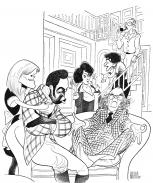