Hirschfeld gathers the greatest stars ever to play the Shubert Theatre in New Haven in a group portrait.

In one week, September 14 - 21, seven Hirschfeld drawings appear in the New York Times.

For Whoopi Goldberg's landmark solo show on Broadway, Hirschfeld includes 40 NINAs in the drawing, the record for 15 years. 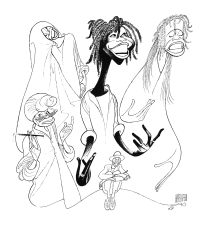 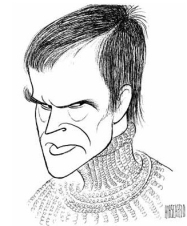 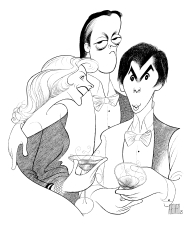 Description
sunday in the park with george bernadette peters and mandy patinkin, 1984 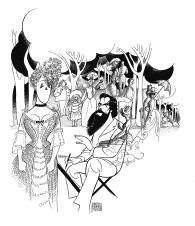 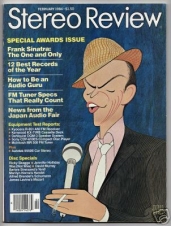 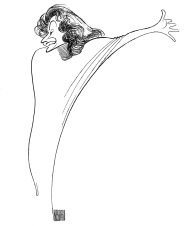 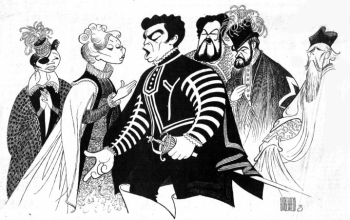 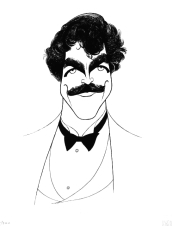 …For half a century now, Al Hirschfeld has been turning out these uncanny wonders, joyous masterpieces of theatrical caricature, in a drab attic studio, his stubby body perched in an old barber chair he bought 35 years ago in the Bowery, arching over a drawing board cross-hatched with a zillion Exacto grooves.

It’s been a hectic time for Hirschfeld –five shows open soon, plus the new TV season, which means a dozen deadlines in ten days for the The New York Times and TV Guide, his main outlets.

He just back from Baltimore, where he saw a preview of Jean Kerr’s new play and, a sketch pad in his lap, feverishly drew a rough draft of the stars, working in the spillover light from the stage. He rips a page off a thick pad on which he’s scribbled primitive versions of Gilda Radner and Sam Waterson in pencil.

…His ambition, still, is to reveal the most personality in the fewest strokes. “The anatomy isn’t interesting to me. I try to stay away from eye-ear-nose-and-throat likenesses. A big nose, you make it bigger –but that’s witless. What I try for is how he seems.”

…’I’m still involved with the mystery of line and what it can do. I’ve found no formulas; it’s difficult not fall back on what you did before. All I know is to keep paring it down, eliminating, until it’s pure line that communicates.