Contributes a publicity drawing for the original release of Singin’ in the Rain.

Description
gene kelly, debbie reynolds, and donald o'connor in singin in the rain, 1952 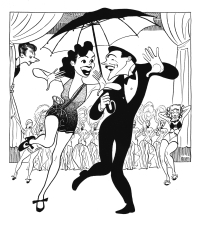 Description
ernest hemingway, gouache on board, 1950 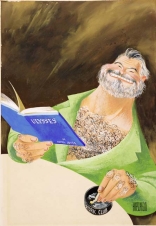 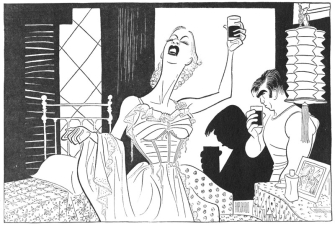 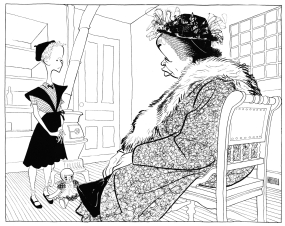 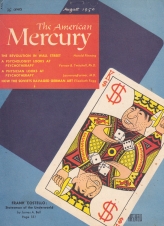 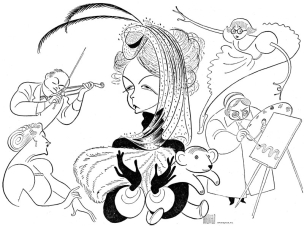 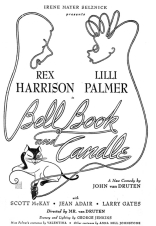 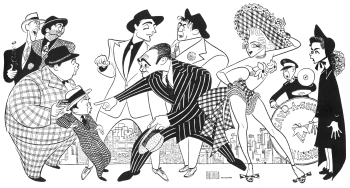 In the Fifties I bought a house in the nineties, and became a staunch defender of the capitalist system. It seemed to me that any economic system so sloppily and benevolently conceived that even I could eventually wind up owning a house could not be all bad.

It all began with a telephone call from S. J. Perelman sometime in the Forties. He suggested we collaborate in the writing of the book for a musical. We met for lunch at the old Lafayette Hotel café that same day. I don't remember what I ate at that luncheon but fifteen years have passed since then and the gas pains are still with me. Our collaboration eventually included lyricist Ogden Nash and composer Vernon Duke.

The four of us labored a couple of years on this foolproof, tightly-knit extravaganza and whelped (from the public point of view) a piece of idiocy titled SWEET BYE AND BYE. The week before this four-hundred-thousand-dollar mish-mash folded in Philadelphia, Perelman and I had lunch with Ted Patrick, the editor of Holiday Magazine, at the Warwick Hotel. Patrick, an old friend of Perelman's, made the happy mistake of asking him what his plans were after the contemplated opening in New York. Perelman lackadaisically responded that he was going swordfishing off the Florida coast. Had Patrick called for the check at that moment, I would probably still be living in my reconverted storage space on the roof of an apartment building on West Fifty-seventh Street.

But Patrick insisted on compounding his original gambit of probing Perelman's plans for the future. He asked if Perelman would care to write a piece for Holiday about his adventures in swordfishing. Perelman countered with the suggestion that perhaps Hirschfeld could be included in the deal to illustrate the article. Patrick, a bit more cautious, allowed that maybe it could be worked out, he would give it some thought. I interrupted to announce that, tempting as these proposed plans were, they did not fit into my firm promise to meet my wife and year-and-a-half-old daughter in Hollywood. Dolly, my wife, had been touring on the road in the starring role of LUTE SONG for the past nine months and nothing could sway me from reacquainting myself with my family.

Patrick, throwing reason to the wind, boldly made the proposition that perhaps Perelman could change his plans about swordfishing in Florida, that both of us be despatched to Hollywood to write and draw something about these colorful natives for Holiday magazine. Thus it was that after some additional martinis and insane logical conversation, we were commissioned by Mr. Patrick to go around the world. Before the week was out we managed to suck in Simon and Schuster for a fat lee in advance of royalties on a book which turned out to be the best-seller Westward Ha.

The accumulated loot from Holiday and Westward Ha enabled me to buy my house in nineties in the early Fifties.