Spends the summer visiting movie sets around the country to make drawings of The Alamo, Inherit the Wind, Elmer Gantry, and West Side Story.

For Art in America, he creates a collage and ink drawing of the contrast between the modernist buildings of Brasilia and the local vernacular architecture.

Draws a curtain call for the Academy Award hopefuls in the Best Actor and Actress categories.

At the request of a reader who wanted to know how many NINAs to look for, Hirschfeld begins to add a number next to his signature when there is more than one.

Hirschfeld signs his name in Japanese caligraphy in his drawing of The Grand Kabuki.

Gathers four European plays on Broadway in the November 20th edition of The New York Times. 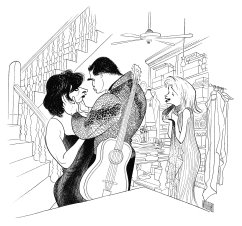 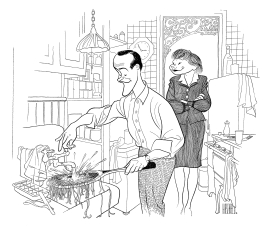 Description
brasilia, pen and ink and collage. art in america, 1960 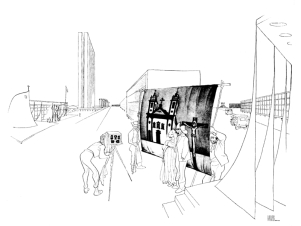 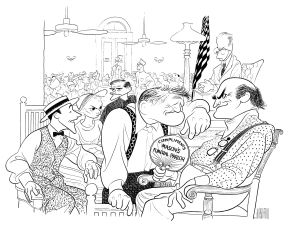 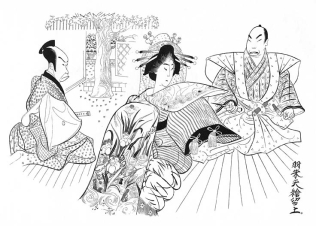 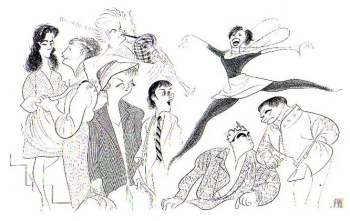 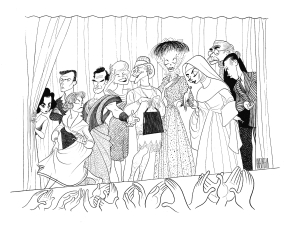 Description
on the set of the alamo john wayne and john dierkes,1960 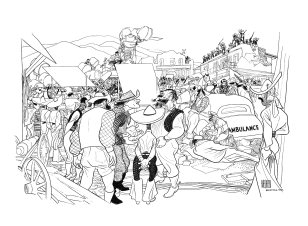 The notable theatrical events so far, in this new decade, have taken place mostly outside of the provisional theatre. Robert Frost read his poem at President Kennedy's inaugural in Washington and the rostrum caught fire. FBI security agents rushed to the rescue and in full view of the TV audience (probably the largest ever assembled in the world's history) put out the fire by pouring ginger ale on it.

I speculated at the time on the various ways this spectacle would have been staged in other countries. In England, they probably would have removed Mr. Frost to a place of safety and then carted of the burning rostrum. In the Soviet Union, they no doubt would have arrested Mr. Frost. In France, the Pompiers would have perhaps just peed on the fire.

Other highlights of the past seasons have been Castro's performance up at the Hotel Thérèse in Harlem and Premier Kbrushchev's balcony scene from the second-boor porch of the Soviet Embassy on Park Avenue. Both of these turns have been (to borrow an adjective from Brooks Atkinson) “rewarding-'' But undoubtedly the most dramatic off-Broadway extravaganza so far has been the staggering production of shooting a man into outer space.

In the ensuing years I expect to find myself, on alternate weeks, either in New Haven, Boston, Philadelphia or Washington, making sketches of a show to be correlated into a design for the Sunday drama section of The New York Times. If my ink bottle holds out and the patience of my editors endures I intend to continue this procedure until space sends a man for me.