Sees Dolly Haas for the first time in summer theater production and is instantly smitten.

Shows the history of the American Communist Party in one drawing for Fortune magazine.

Gene Kelly appears in his first drawing, watching a rehearsal of a summer stock production of Two Weeks With Pay.

Contributes five drawings for publicity of Chaplin’s The Great Dictator.

Description
raimu in the man who seeks the truth, 1940 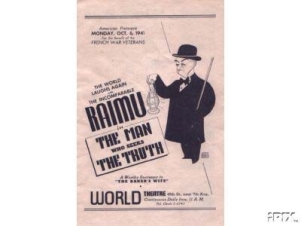 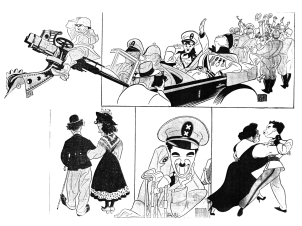 Description
strike up the band, 1940 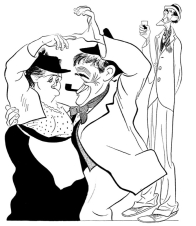 Description
a rehearsal of two weeks with pay at the ridgeway theare, white plains, ny, nyt 6/23/40 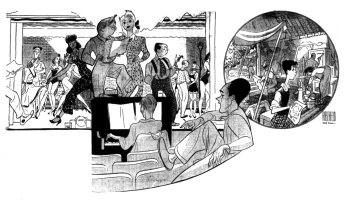 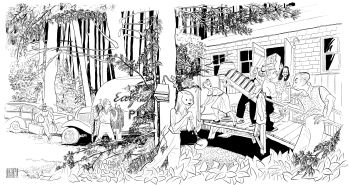 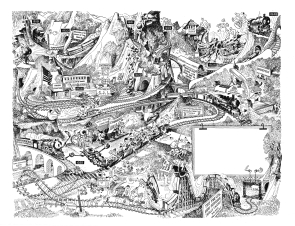 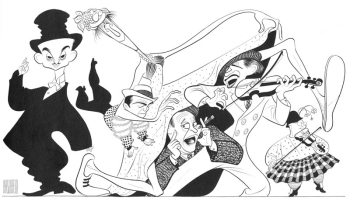 In the Forties I married Dolly Haas, World War II began and our daughter (Nina) was born 36 days after the war ended. These three seemingly unrelated facts had a profound influence on the theatre of the Forties . . . or rather, on my personal theatre of that decade. First, Dolly Haas, during most of those years, transferred her genius for the stage into baking home-made bread and broadcasting nightly as America's “Axis Dolly'' over the facilities of the OWI to her former colleagues in Germany. Secondly, all of civilized humanity joined together in the greatest of all collaborations to write a third-act finale for the most stupendous spectacle ever devised by man. The War became the living theatre. And lastly, I celebrated our daughter's birth by incorporating her name in a drawing bearing the legend “Nina the Wonder Child.”

Nina's name, openly but sneakily contrived to be part of the drawing, appeared for the first time. Ever since then I have included her name slyly in all of my drawings. This bit of tomfoolery became one of the worst-kept secrets in the publishing business. The game became a sort of ritual to many readers of the Sunday Times drama page. On one occasion I made the unpardonable error of microscopically lettering in the name of Nina's best girl friend, Lisa, the daughter of the distinguished writer, Louis Kronenberger. Well! all hell broke loose on that one. I received telegrams and flowers from forgotten acquaintances and complete strangers: one all the way from Alaska, congratulating my wife and me on the new arrival.

Since then I have confined my nonsense to the single name NINA. I have tried leaving Nina's name out on a couple of occasions but the results were disastrous. Letters poured in with complaints such as: “Where the hell is it?'' “My wife says Nina's name is in Ethel Barrymore's hair. We have a bet on it. I say it isn't.” “Spent the whole of last Sunday looking for Nina's name but no can find.'' Etc., etc.

I have learned, the hard way, to put Nina's name in the drawing before I proudly display my own signature simply because the only one who would notice that I had neglected to put my free advertisement in the lower right-hand corner would be me.