Prints a series of lithographs in small editions including "Art and Industry", "The Corset Shop", "Chelsea Pub", and "The Dizzy Club."

Creates publicity art to promote the film of Alfred Lunt and Lynn Fontanne in The Guardsman.

Captures Flo Zieigfeld and the stars of his last Follies, including Harry Richman, Jelen Morgan, and Ruth Etting.

To escape the Depression, Hirschfeld and his wife set sail for Tahati. 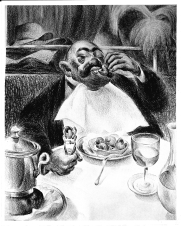 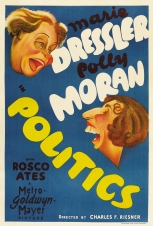 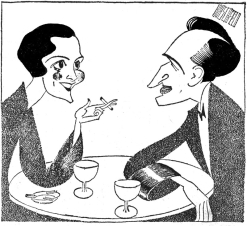 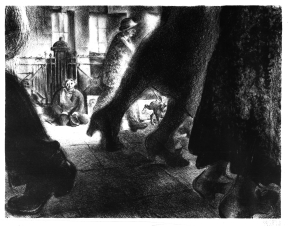 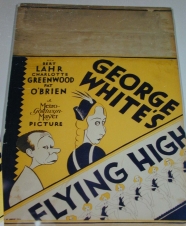 For political reasons the Federal government padlocked its own production of THE CRADLE WILL ROCK on opening night at the Eltinge Theatre in 1937. The assembled first-nighters, including myself, were entertained in front of tile darkened theatre by Marc Blitzstein (the opera's composer) playing at a mini piano on an improvised open truck, while Orson Welles (WPA producer of the show) scurried around town in a frantic search for another available theatre. About nine o clock Mr. Welles triumphantly reappeared to announce that he had managed to book the Jolson Theatre and all tickets would be honored at the speak-easy performance to take place that night. The audience trekked enthusiastically after their leader from The Eltinge on 39th Street to The Jolson on 59th Street, but unlike the lemmings, they were amply rewarded for their loyalty.

Leaving props, scenery and costumes in the shuttered Eltinge, we (the cast and audience) eventually found ourselves seated in the Jolson staring at a bare stage. Accompanied by thunderous applause Mr. Welles and Mr. Blitzstein made their unique entrance pushing a piano on stage from the wings. Blitzstein seated himself at the piano and Welles began his unrehearsed recital of the physical properties, lighting, costumes and locale of the original production which they had worked on for almost one year. He described a sumptuous spectacle paid for by the U.S. Treasury. The stage was to have been translucent with specially designed lighting by Feder; the light source from below stage would have created the illusion of endless space with the performers suspended in it.

Having established the actual physical production with words he then announced that he would play all the parts and Mr. Blitzstein would sing the arias.

At a given signal Mr. Blitzstein struck the first chord of his revolutionary score when, to his astonishment and Mr. Welles', no less than the audience's, an actor from the cast stood up from his seat somewhere in the balcony and sang his rehearsed role. Mr. Blitzstein had only to play the music, Mr. Welles only to stand there dumbfounded and delighted, as actor after actor, scattered throughout the house, arose in his place and played his respective part. It was a memorable night in the theatre.