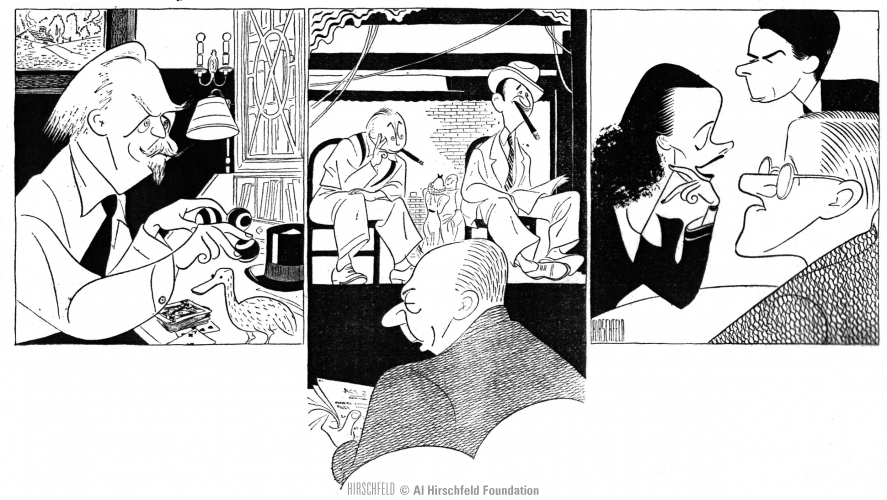 Hirschfeld spent the summer of 1940 visiting summer playhouses for several New York newspapers. In Hershey, Pennsylvania that summer he saw the German actress Dolly Haas for the first time and was smitten. In New York that same summer, he visited theaters to catch the preparations for the new season, both on Broadway and at Radio City Music Hall. In this work he drew a composite of three different shows prearing for their early fall openings. Dante the Magician was playing a limited engagement of his magic show at the Morosco and its title was taken from his stage trademark, which was to utter three nonsense words, "Sim Sala Bim" during his performances to acknowledge applause. He directed the production under his real name and gave the audience its money worth. As the Times reported, “When giving a show, Dante gives a show.”

The other two productions did their own versions of a disappearing trick. Bangtails never opened. MacGregor had directed Irving Berlin’s hit, Louisiana Purchase earlier in the year, and as one of the busiest directors of the period, when this show fell through, he went on to direct Hold On To Your Hats with Al Jolson and Martha Raye and then Panama Hattie with Ethel Merman that fall.

Jupiter Laughs featuring a young Jessica Tandy only ran for three weeks. The play received terrible reviews, but Tandy did not. In fact, some reviewers regretted that she was ill served by the material, as she had been for her last several appearances, a trend that would continue until she played Blanche Du Bois in the original production of A Streetcar Named Desire in 1947.

Please be aware that these digital images come from a variety of sources and quality varies. As we digitize our archives, more and better images will be available to view.