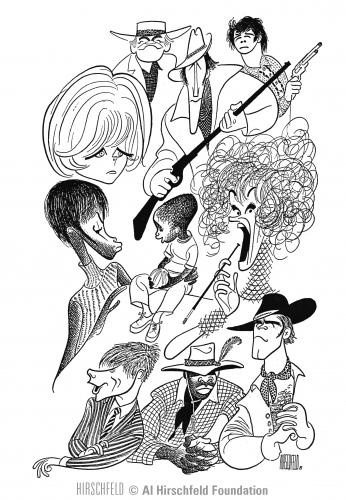 Hirschfeld captioned this work “Some of the new shows scheduled (between commercials) for this fall on your groan box.” In the era before cable television, the new television season on the three networks were subjects of great anticipation. The television mirrored the theater season in that it ran from September to the end of May, only the networks would then repeat the shows (commonly referred to as “reruns”) over the summer.

These shows represent their time. The Outcasts was a story of two cowboys, one Black, and one White, who work together even if they aren’t friends, reminiscent of The Defiant Ones. Julia was a groundbreaking series, the first to star a Black woman in a non-stereotypical role, but at the time, some critics thought the show was too apolitical. Gil Scott-Heron’s classic “The Revolution Will Not Be Televised) name checks the series as something you won’t see when the uprising comes. Robert Morse starred in a innovative series that charted the ups and downs of a young couple, in the form of a Broadway-style musical. It was filmed before a live audience and featured new songs, standards, and even pop hits of the day. Despite an Emmy nomination and guest stars that ranged from Liza Minnelli to Sid Caesar it ran only one season. Like the theater, many of these shows had very short runs.

While it only ran for two seasons, Lancer has continued to play role in American culture. The 2019 movie Once Upon a Time in Hollywood incorporates a fictionalized account of the filming of Lancer's pilot episode, with Leonardo DiCaprio appearing as a villain in the episode. Additional scenes are featured in the film’s novelization.

Please be aware that these digital images come from a variety of sources and quality varies. As we digitize our archives, more and better images will be available to view.