You're Invited to See Where It All Happenend 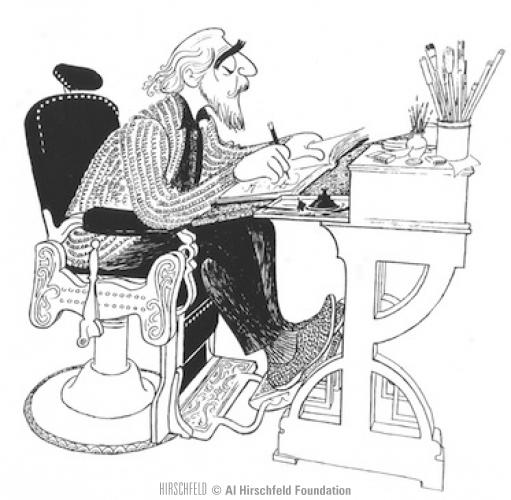 Hirschfeld created virtually all of his 82 years of work seated in a Koken barber chair at an oak drawing table. For the last 62 years, the chair and table have been on the 4th floor of his Upper East Side brownstone by a bay window. The table has a top that looks like brown corduroy because the artist cut so many boards on it. The barber chair — which Hirschfeld called "the last functional chair" because it could go up and down, swivel, and recline into a chaise lounge — was a relatively new arrival, having only been at the Hirschfeld home for a mere 18 years. It replaced another chair that according to the Hirschfeld Foundation's archivist, David Leopold says in The New York Times, had become so decrepit that “I thought we were going to lose Al Hirschfeld to tetanus.His old chair had springs coming out — I really thought we were going to lose this national treasure to something really simple.” Tonight the chair and table make their debut at their new home: the entrance of the New York Public Library for the Performing Arts at Lincoln Center. the table will continue to show drawings just about as frequently as Hirschfeld's work appeared in the Times. In other words, about every other week. The works will relate to either events and exhibitions at the Library or the Lincoln Center campus. The first work to be featured will be a 1984 portrait of Betty Comden, writer, performer, lyricist and one time Hirschfeld neighbor. The next works to be shown on the table they were originally drawn on, will be portraits of legendary fashion designers to coincide with Fashion Week at Lincoln Center. There's always something interesting at the Performing Arts Library, either on view or in their collection. So come on by and see where Hirschfeld's nine decades of works were created.