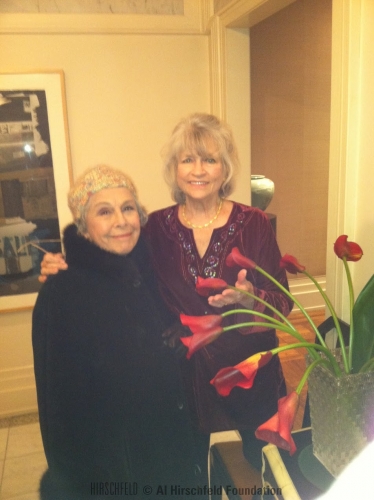 A Rememberance by Louise Hirschfeld

Marge Champion was all over the creative map… She was beautiful and kind inside and out.
Her energy was contagious. She danced with Gower her friend, husband, lover. Their special relationship as a dancing team exuded exquisite technique, lots of seduction and love. The MGM technicolor musicals are a lasting testament to their talent for dancing romance on the screen.

Through all those exciting years of Hollywood, New York and Stockbridge her friendship with Dolly and Al Hirschfeld was steady and solid. She first met Al when she came to New York in 1938. She always remembered an afternoon she came to Al’s home and studio, then on 57th Street at the Osborne, and while he was at his table drawing, she unburdened herself of all the concerns and worry she had about her then 18-year life. As she finished in a pool of tears, she asked Al what she should do. The 33-year old artist looked up from his drawing and simply said “Grow up.” The sage advice cemented a close friendship between the two for the rest of their lives.

Years later, when she noticed that the artist and I had become a couple… she invited us to the opening summer night at Jacob’s Pillow.  She brought a special kind of glamour to Dance’s
Berkshire mountain retreat.  We often dined at Dream Away Lodge, a kind of 1950s rural place in the woods.

As Al and I decided to combine our lives, I was lucky to inherit Marge as a friend…we even celebrated a Virgo Birthday party together. During the next few years Marge was a regular guest at the Hirschfeld Home on 95th St, and that continued after Al’s passing and even into my later marriage to Lewis Cullman. Marge literally swept him off his feet as well.

She was drawn three times in her heyday with Gower in both stage and film roles. Then one more time in 2001 when she joined the cast of Follies and danced with the great Donald Saddler.

We were privileged to have Marge in our lives. Between the film of her work, and Al’s drawings, we have a wonderful record of her remarkable talent.