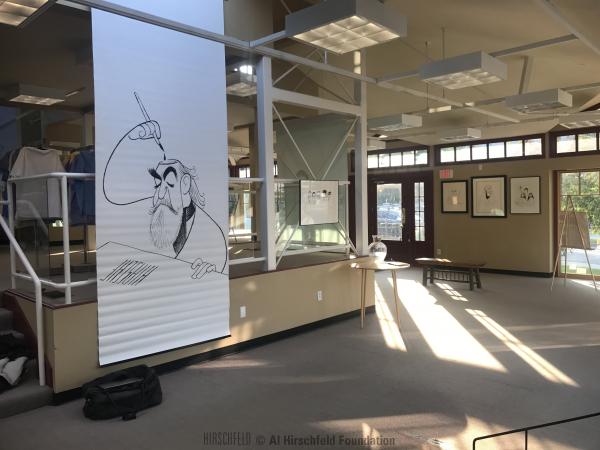 History is replete with examples of how art can transform communities and neighborhoods. Whether it is the Soho district in New York in the 1970s, or the music scene in Seattle in the 1990s, art and artists can revitalize areas. Manchester, Vermont is a beautiful New England town that was once the home to dozens of retail outlet stores. As the nature of retail has changed so dramatically over the last few years, the core of Manchester was hollowed out with empty storefronts. Art Manchester was formed to bring artists back into town, and using the storefronts as galleries for local artists as a way to breathe life into this charming town.

Last month, at the invitation of Dr. Joshua Sherman, an Al Hirschfeld Foundation board member, and founder of the unique multi-media performing space, The Mill in East Arlington, Vermont and Arts Manchester, the Al Hirschfeld Foundation organized an eight-week pop-up gallery of more than 100 Hirschfeld works for sale in Manchester. The gallery has met with great success. A seemingly never ending stream of lifelong and new Hirschfeld fans fill the gallery on Fridays, Saturdays, Sundays, and by appointment.

The space is decorated with oversized colored banners of Hirschfeld drawings and original drawings and lithographs adorn the walls. There are drawings of a 1988 production of Julius Caesar featuring Martin Sheen and Al Pacino, the original stage production of The Seven Year Itch, and the cast of Ally McBeal that was published as a gatefold cover of TV Guide.

There are also artist proofs of limited edition lithographs and etchings from Hirschfeld’s personal collection that cover a wide range from his sublime etching of Edwin Booth, to the suave styling of Mick Jagger. There is even a section dedicated to NINA, where the focus is educating young (and perhaps older) Hirschfeld fans about Hirschfeld’s tradition of hiding his daughter Nina’s name in his drawings. Samples of easy, medium and hard images are laid out visitors to find and circle all of the NINAs in a drawing. The drawings range from 1 NINA to 40 NINAs!

The gallery also includes a small run of t-shirts featuring many of Hirschfeld’s most beloved drawings, and those will be available exclusively at the gallery during its run, along with posters of Richard Kiley and Groucho Marx, along with copies of the Hirschfeld Century book. All proceeds from the pop-up gallery benefit the Al Hirschfeld Foundation’s education programs.

The pop-up gallery has accomplished its goal of bringing new audiences in Manchester, as well as satisfying Hirschfeld fans near and far. Should you decide to leaf peep this fall, make a beeline to Manchester as the gallery will only be open for one more month, closing October 18, 2017. Set your GPS for 4802 Main Street, and plan on spending a Friday Saturday and/or Sunday perusing some of the Line King’s greatest subjects.