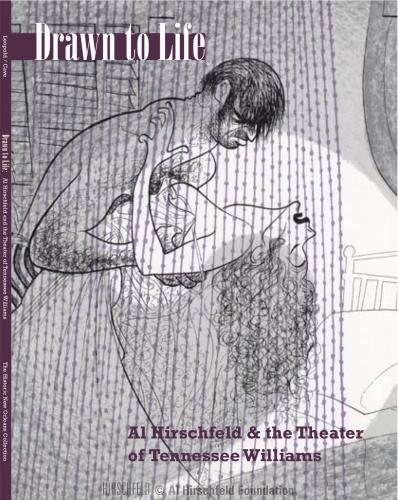 In commemoration of the centennial of Tennessee Williams’s birth on March 26, 2011, The Historic New Orleans Collection (THNOC) and the Al Hirschfeld Foundation will present the exhibition Drawn to Life: Al Hirschfeld and the Theater of Tennessee Williams” at THNOC's Williams Research Center, 410 Chartres St. Opening on January 11, 2011, the exhibition is free and open to the public through April 3, Tuesday–Saturday, 9:30 a.m.–4:30 p.m.

Over six decades, legendary artist Hirschfeld drew almost all of Williams’s Broadway and off-Broadway productions and three of his film adaptations, including a landmark series of works based on the 1951 film version of A Streetcar Named Desire. No other artist so thoroughly documented Tennessee Williams in the playwright’s own lifetime.

Now, for the first time, Hirschfeld’s drawings from collections around the country, augmented by related material from The Historic New Orleans Collection’s Tennessee Williams holdings, are united to give an account, literally drawn from life, of the work of Tennessee Williams on Broadway and beyond.

Many of the drawings and Williams ephemera are collected in a companion book to the exhibition with a foreword by Rex Reed and essays by Mark Cave, manuscript curator at THNOC and David Leopold, archivist for the Al Hirschfeld Foundation. The catalogue retails for $20 and is available directly from THNOC.