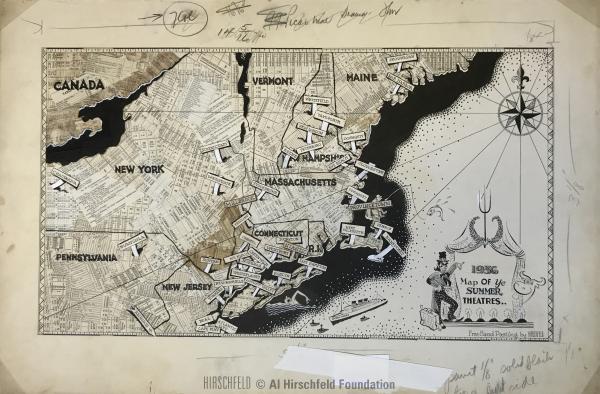 What better way to celebrate summer in the world of Hirschfeld than to feature five of his classic summer theater drawings that were a regular feature in newspapers from 1935 to 1980? We are pleased to offer original ink on board drawings from the Straw Hat Trail that are unique in Hirschfeld history.

This “Free Hand Pasting by Hirschfeld” shows the northeastern section of the United States composed of a collage of train schedules, which would have been the primary way New Yorkers would have reached these rural locales in 1936. He includes the towns of many historic theaters including those for the Cape Playhouse in Dennis, Massachusetts, the Berkshire Theatre Festival in Stockbridge, Massachusetts the Ogunquit Playhouse in Maine, the Peterborough Players in New Hampshire, the Westport Playhouse in Connecticut, and the Cape May Playhouse in New Jersey among others.

In the summers of 1938 through 1940, Hirschfeld traveled to summer theaters to file visual reports of summer theaters that appeared on the front page of the New York Times and Herald Tribune. Oftentimes he includes an array of scenes to capture the flavor of each playhouse and he frequently included a map and the mileage from Times Square. In this drawing he captures the Pulitzer Prize-winning playwright Owen Davis with actor Arthur Byron who was getting ready to celebrate his first half-century of acting (he is best known today for his role in film, The Mummy, 1932) and Erin O’Brien-Moore, the star of Elmer Rice’s Pulitzer Prize-winning drama Street Scene.

“The Summer Theatre Season- The Map Above Listing A Fair Sample Of The Playhouses,” 1940

Summer theaters started to sprout like mushrooms up and down the eastern seaboard in the late 1930s as this drawing shows. This rustic idyll so captured the Straw Hat Trail that it was featured in a museum exhibition on the 75th anniversary of the Bucks County Playhouse in 2013-14. This may also be among the most animals in any Hirschfeld drawing.

“Life Along The Citronella Circuit,” 1948

“Just now summer theatres are breaking out in bosky dell, by mountain tarn, in abandoned silos, refurbished stables and haylofts, on the ends of piers, all the way from La Jolla, Calif., to Ogunquit, Me.,” wrote dean of Broadway press agents, Richard Maney for this article in the New York Times Magazine section, illustrated by this drawing. Maney was an old friend of Hirschfeld’s who was the first to get him to draw Broadway twenty-two years earlier.

“All Get Aboard The Summer Theatre Special,” 1949

Thirteen years later, and most New Yorkers were still taking trains to summer theater destinations. In this work, Hirschfeld imagines a wire range of men, women and children who set out for summer stages. When the drawing was published in the New York Times, it included a list of theaters, from Maine to North Carolina, by state and how many miles they were from Times Square.

This drawing was published in Colliers magazine as part of John O’Hara’s regular column. It shows an unnamed summer theater during intermission of Robert Sherwood’s drama that helped make Humphrey Bogart a star. The popular play was a staple of summer theaters at the time.

In 1998, the Norman Rockwell Museum in Stockbridge (just down the road from the Berkshire Theatre Festival) organized an exhibition, “Footlights and Fireflies: Summer Theater As seen by Hirschfeld,” that documented through Hirschfeld’s drawings, how most of Broadway decamped to the mountains, lakes, and seashores of summer playhouses in the 30s and 40s because New York theaters were not air conditioned. It followed the story all the way through the late 20th century when Joe Papp’s New York Shakespeare Festival brought Broadway stars into a rural setting in the middle of Manhattan by presenting the Bard in Central Park.

These works not only have historic value, but considerable monetary value as well. In 2008, the highest price ever paid for a Hirschfeld drawing at auction ($84,000) was for a summer theater drawing of the County Theatrein Suffern, New York.