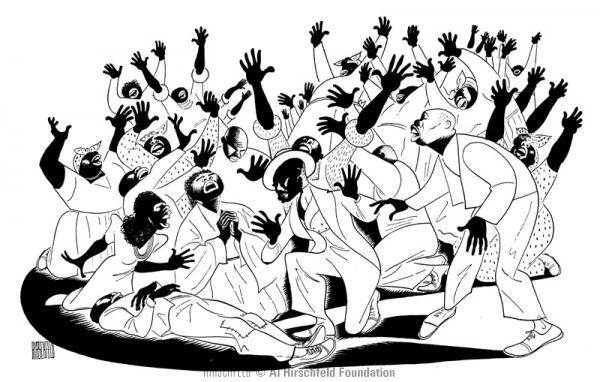 Today’s Musical Monday celebrates the 1944 opening of the revival of Porgy and Bess at city Center. Hirschfeld drew the original production and four of the six revivals. His 1942 drawing was also used on the cover of the album of 78’s of the cast recording from that production. He drew another drawing for the poster for the tour of the same revival, and this was essentially the same production as the 1942 revival. There is also a wonderful drawing from the a 1964 off-Broadway revival at City Center featuring William Warfield as Porgy and Ralph Guillaume as Sportin’ Life. In addition, Hirschfeld drew the 1959 film adaptation for Columbia with an all star cast that included Sidney Poiter as Porgy and Dorothy Danridge as Bess.

Hirschfeld was an old friend of the Gershwins, and drew the brothers many, many times.