LOST IN THE STARS Black Theatre Makers Drawn By Hirschfeld 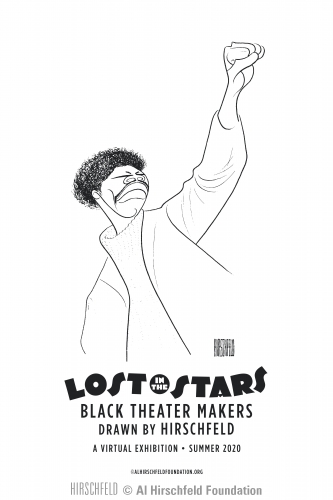 The Al Hirschfeld Foundation is proud to announce the latest in a series of online exhibitions exploring the work of one of the most iconic artists of the last century. Coinciding with Al Hirschfeld's 117th birthday today, the Foundation has launched special exhibition for these times: "Lost In The Stars: Black Theatre Makers Drawn by Hirschfeld", a collection of over 25 drawings and paintings documenting nearly three-quarters of a century of Black theater artistry. This special digital exhibit will be online August 2, 2020 at before a new exhibition is presented.

Black actors, directors, composers, lyricists, playwrights, designers, and producers have long played a role in the American Theater despite the inherent racism on The Great White Way. From the start in the minstrel shows of the 19th century, Black artists have suffered underrepresentation both on and off stage in America. Modern Black theater on Broadway begins with the legendary Shuffle Along, a Black musical that literally set the template for Black musical comedies for a decade, and while Hirschfeld had yet to draw the theater when the show premiered in 1921, his first drawing of Black performers ever was of Miller and Lyles, the stars and book writers of Shuffle Along. Over the next nine decades, Hirschfeld would often draw Black theater makers in comedies, musicals, dramas, and revues. In fact, his first and last theater posters, covering more than 50 productions over sixty years were of Black performers.

The title of this exhibition comes from the musical of the same name that explored the racial injustices of the 20th century South Africa apartheid system. But it can also serve as a metaphor of the Black creative in a predominantly white theater world. Too often the contributions of Black artists have been minimized or co-opted, and the Al Hirschfeld Foundation wants to celebrate many of the Black stars in all disciplines that make the American Theater what it is today. In this online exhibition, we present 26 images from over 72 years, but there are many, many more. This will be the first of multiple exhibitions that will explore Black theater, film, dance, and music over the next year. We believe that BLACK LIVES MATTER. BLACK ART MATTERS. And BLACK THEATRE MATTERS.

In keeping with the spirit of Hirschfeld, this exhibition is free and open to everyone. The show is part of the AHF's continuing mission to promote interest in the theater and the performing and visual arts. For this exhibition there is a special gift shop of merchandise connected to the exhibition at online . Due to the pandemic, Apparel and tote bags are not available at this time, but we hope to have them available before this show ends.

Go behind the lines of Hirschfeld's art with "The Hirschfeld Century Podcast," nominated as "Best NYC podcast" by the 2020 Apple Awards.  A special episode dedicated to the works featured in "Lost In The Stars: Black Theatre Makers Drawn by Hirschfeld" will be available starting June 30th from iTunes and other popular podcast sites as well as AlHirschfeldFoundation.org/podcasts.