Hirschfeld by the Book 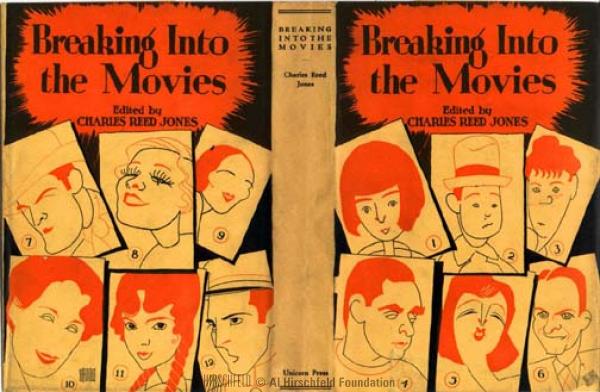 "breaking into the movies"

The New York Comics & Picture-story Symposium is a remarkable weekly event led by artist Ben Katchor that explores the myriad aspects of comics, its culture, and the art of the storybook. This free series has held nearly 200 weekly events since it first started. This fall alone it features talks by award-winning artists such as Sue Coe and Robert Grossman, and many other artists or scholars. On September 12th, Al Hirschfeld Foundation Creative Director David Leopold was invited to present a new talk, “Hirschfeld By The Book,” that explored Hirschfeld’s impact on the literary world.

Hirschfeld has virtually been synonymous with caricature since he published his first portraits for Warner Brothers films in April 1925. His first theatrical drawing was in December 1926, and he would continue to draw the theater for New York newspapers, magazines, posters and programs for the next 76 years. Simultaneously, he both recorded and defined Hollywood for nine decades in images and posters that are as iconic as the films themselves. He was there at the birth of television and captured its first half-century, creating more covers for TV Guide than any other artist. He recorded more popular music than any MP3, CD, LP, or wax cylinder ever did, with a handful of his album covers, from the cast album of My Fair Lady to Aerosmith’s Draw The Line, becoming landmarks of 20th century graphic design.

In the illustrated talk, Leopold revealed how Hirschfeld also left his mark in the world of literature. Books that Hirschfeld authored allowed him to explore the world outside of performance, and he collaborated on a series of books with S. J. Perelman, including one that took the two friends around the world. His illustrations enlivened other books by Fred Allen, Garson Kanin, William Saroyan, Brooks Atkinson and John Mason Brown, while other illustrated books covered topics as diverse as the Algonquin Round Table to the Johnson White House. Leopold shared images and stories from unpublished works including books on the Russian theater and film scene in the 1920s, and a history of the African impact on the Bahamas.

Among Hirschfeld’s best friends were writers. His art for their books has left an indelible impression on readers and generations of artists and graphic designers. Leopold, along with Archives Manager Katherine Eastman who is responsible for supplying the images during the improvised talk, look forward to presenting the topic again. If your organization is interested, please contact us at info@alhirschfeldfoundation.org.