The Eugene O'Neill Installation At NYU Is Ready For Viewing 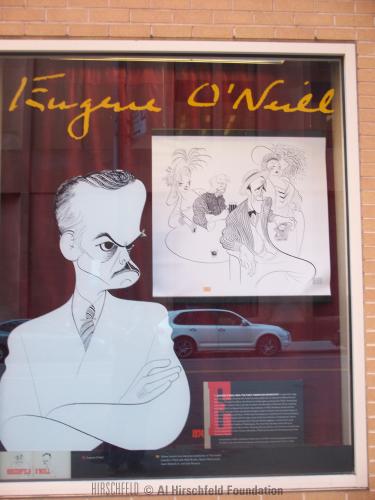 After a three day installation, the Al Hirschfeld Foundation's latest collaboration — more than 70 years of Hirschfeld drawings of Eugene O'Neill and his plays arrayed themeatically over 13 large windows — is now ready to be seen any hour of the day or night for free at NYU. Working with New York Univeristy's Office of Civic Engagement, the staff at the school's Kimmel Center and members of the Eighth International Conference on Eugene O'Neill, the Hirschfeld Foundation has created a stunning display of Hirschfeld images that cover O'Neill plays from Anna Christie in 1921 to a revival of A Moon For The Misbegotten in 2000. Conceived by Louise Kerz Hirschfeld, President of the Foundation and designed and curated by Foundation archivist David Leopold, each window is dedicated to a specific play in the O'Neill canon.

For instance, Long Day's Journey Into Night is seen in several productions over thirty years including the original 1956 Pulitzer Prize-winning production starring Florence Eldridge and Fredric March as Mary and James Tyrone, and a number of revivals. For The Iceman Cometh, viewers can see original 1946 production, a 1960 live television production starring Jason Robards and directed by Sidney Lumet, a 1973 film version starring Lee Marvin as Hickey and directed by John Frankenheimer, Robards in his acclaimed 1985 revival, and kevin Spacey performance in 1999.

The imaginative display allows visitors to see the works of both men as never before by bringing together all of the drawings and arranging them in a visually dynamic fashion. To see images of the windows, check out our Facebook photo album.

The installation can be seen 24/7 through August 15th.