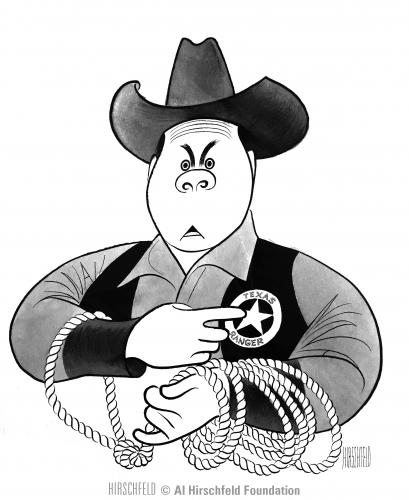 The response to the Foundation’s Shop website has been gratifying. We are delighted that people want to see and learn of Hirschfeld’s prodigious output, and certainly his print oeuvre is among his most popular work, as so many people live with these prints. Probably the most often asked question since we have launched the site is when will original drawings be available? We always knew that it would be in the near future, so we are happy to announce the time is now.

Starting this month, we are including a selection of drawings alongside lithographs, etchings, and books. Of course we can’t put everything online, but the works we have selected cover a wide range of theater, film, television and music, as well as different decades. They include (in no specific order)

Briggs was a legendary tap virtuoso who, like Hirschfeld, spanned generations from Bojangles to Savion Glover. This drawing captures him in his solo number in his second and last Broadway appearance in Black and Blue (his Broadway debut came in a musical you may have heard of: Are You With It?, the drawing of which featured the very first NINA). In addition to being a star dancer, he was also an accomplished jazz percussionist whom Duke Ellington described as “the most superleviathonic, rhythmaturgically syncopated tapsthamaticianisamist.”

While many love (and collect) Hirschfeld TV Guide covers, not as many know of his drawings that appeared in the magazine in the mid 1960s that ran with reviews of new shows. In these drawings, Hirschfeld gave many their first views of Star Trek, Mission Impossible, That Girl and The Fugitive. Of course, many shows were not hits, such as this western spoof in which Conway played a klutzy sheriff who somehow bumbles his way into solving the crime. Hirschfeld loved to draw a great character actors like Conway.

Hirschfeld created a graphic rich cast drawing to promote this film’s 1956 release, a multiple perspective extravaganza that showed all the leads and scenes from both the WW I battlefield and the general’s headquarters. Paths of Glory was Stanley Kubrick’s first major studio success and in 1977 it was included in an IBM sponsored broadcast series of classic films on network television, Hirschfeld drew individual portraits of each film’s stars for full page newspaper advertisements. Kirk Douglas as Colonel Dax’s head is rendered with Olmec simplicity, and is counter-balanced by the filigree of his uniform.

Although the program read “The Time and Place: Not Specified,” for Tennessee William’s Camino Real, audiences found themselves in the playwright’s mind, as the author himself wrote in the Times right before the show’s premiere: “It is nothing more nor less than my conception of the time and the world that I live in.” Populating the play with a strange cast of characters that includes Lord Byron, Casanova, Don Quixote, and an American sailor named Kilroy, Williams allowed his fecund imagination to run riot, which left playgoers running for the exits in the original 1954 production. In Camino Real, Williams’s literary gifts were in full flower. Like Hirschfeld in his drawings, Williams was unconstrained by reality in this play, which allowed him to create a devastating picture of human nature. Lincoln Center Theater mounted the play’s only Broadway revival in 1970 with Jessica Tandy, the original Blanche Dubois in A Streetcar Named Desire, and a young Al Pacino, making his second Broadway appearance as Kilroy.