On This Date: Libby Holman 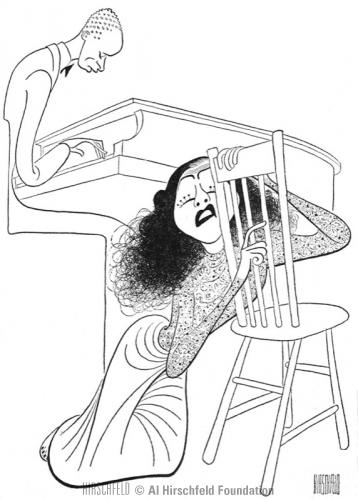 On this date in 1954, Hirschfeld's drawing of Libby Holman and her accompanist Gerald Cook in her one-woman show, Blues, Ballads, and Sin Songs, was published in the New York Times. Holman was one of the original torch singers having made a hit with her signature song "Moanin' Low" from the revue The Little Show in 1929, which starred Al's good friend Fred Allen and Clifton Webb. The following year she introduced "Something to Remember You By", written by early Hirschfeld employer Howard Dietz (Publicity Director of Goldwyn Pictures) and Arthur Schwartz, in the show Three's a Crowd, which also starred Allen and Webb. she became a star on Broadway and appeared in a number of shows through the 1930s, including Cole Porter's You Never Know in 1938

Her life off stage was one filled with tragedy, overshadowed by the mysterious death of her first husband, tobacco heir Zachary Smith Reynolds. Holman faced accusations of murder but was later cleared. The attendant scandal, however, damaged her career, and though she continued to perform on stage into the 1960s, she never quite achieved the level of success she had enjoyed earlier.

She had public relationships with both men and women. Her famous lesbian lovers included the DuPont heiress Louisa d'Andelot Carpenter, actress Jeanne Eagels and modernist writer Jane Bowles. Carpenter was to play a significant part throughout Holman's lifetime. They raised their children and lived together and were openly accepted by their theater companions. she continued to date men, including a young Montgomery Clift, and even married two others.  She also was a fierce champion of social causes and was an early supporter of the Civil Rights movement; indeed, it was through a grant from her foundation that Dr. Martin Luther King Jr. was able to travel to India to study first-hand the non-violent techniques espoused by Gandhi.

In 1954 she returned to the Broadway stage in this one-woman show to showcase her love of what she called "earth songs," which was primarily blues and African American spirituals. Al's drawing accompanied an interview with Holman in which Holman described how her only prop was a simple wooden chair. "I use the chair as an executioner's block for one song and as a cradle and jail in others." She added "I wear Mainbocher skirts and blouses."