Album of the Week: Steve Ross Live at the Algonquin 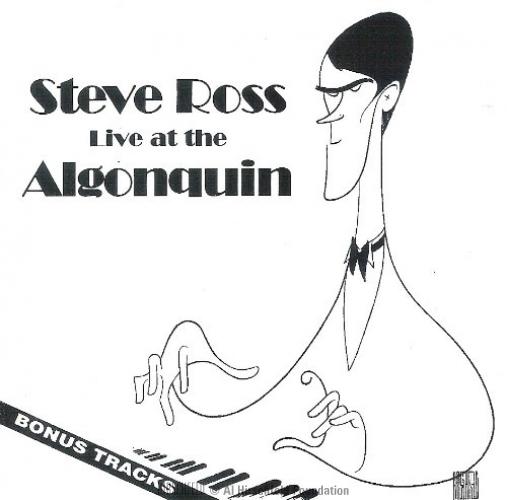 More than 30 years ago, the Algonquin Hotel reopened its fabled Oak Room to cabaret and the hotel naturally turned to Steve Ross as it's first performer. Ross had been stunning audiences since his residency at Ted Hook’s Backstage in the late 1970’s playing classics and obscure gems from the American songbook, becoming the "cabaret world’s reigning Park Avenue dandy and embodiment of the Cole Porter-Noël Coward attitude of garrulous suavity," according to the New York Times. “If I had to sum up western civilization in four words," Ross once declared from the stage, "they would be ‘Cole Porter’ and ‘Fred Astaire.'"

Ross is a singer and pianist, but his first hit theme evening of song was I Won't Dance, a salute to Fred Astaire. "He is the personification of the bygone dream world that his music summons," the Times Stephen Holden wrote after a Ross performance at the Algonquin in 2010 in another Astaire-themed evening, Puttin' on the Ritz. "Dapper and quick witted with a knowledge of his idols that suggests a lifetime of scholarship in an imaginary 90th-floor Park Avenue aerie, he channels their spirits in brittle, fleet performances whose quickened pace evokes ballroom dancing as a challenging aerobic sport."

"Mr. Ross’s sharply accented pianism, which often accelerates during uptempo numbers, belongs to a traditional New York saloon style associated with Cy Walter, piano bars and hotel orchestras. Precisely syncopated, it stands on the outer fringe of jazz. His dry, precisely enunciated singing doesn’t delve into the psychological murk of lyrics. (Porter’s are especially ripe for the picking.) But his subtle emphasis on a witty turn of phrase — the vocal equivalent of a raised eyebrow — makes each small gesture count. It’s finally about enjoyment, pure and simple."

Hirschfeld first saw and enjoyed Ross' act at the Algonquin and he was a natural to ask to draw the elegant portrait of Ross for the cover of Ross' album from his performances at the hotel first released in 1993. Hirschfeld was a regular presence in the hotel durings its heyday and would later be honored with a suite in his name in 1991.

Hirschfeld would draw Ross in his Broadway debut in 1996, appropriately enough in Noel Coward's Present Laughter, in which he played the piano playing valet to Frank Langella's Garry Essendine.

The Oak Room recently closed for an expanion of the hotel's Blue Bar. But for Hirschfeld fans the news is not all bad. The hotel announced that  “The extensive collection of original Al Hirschfield characters will reline the Blue Bar walls and an additional entrance via the hotel lobby will be added (to the existing separate street entrance).”