Album of the Week: Elsa Lanchester Herself 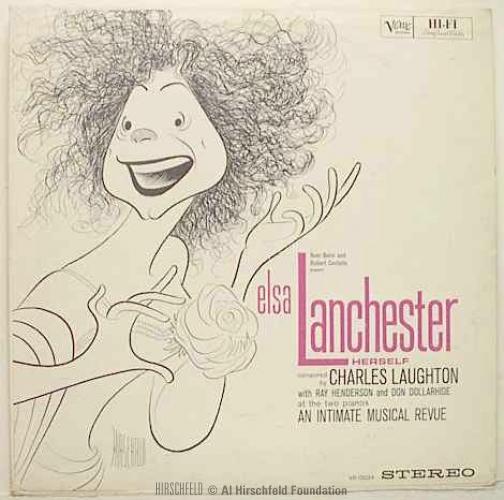 Elsa Lanchester is best known for her performance in the title role of The Bride of Frankenstein, but she was actually quite a verstalie actress and cabaret/music hall performer. Nominated for two Oscars, between films she frequently appeared on stage at the Turnabout Theater in Hollywood where "she performed her solo vaudeville act in conjunction with a marionette show, singing somewhat off-colour songs," according to one account. Some of these songs were recorded on albums with titles such as Songs for a Shuttered Parlour and Songs for a Smoke-Filled Room.

Lanchester was married to actor and director Charles Laughton and appeared frequently with him in films. For many of her albums, he provided spoken word introductions and occasionally joined her in song. Laughton helped her adapt her Turnabout performances into a nightclub act which would eventually be titled "Elsa Lanchester Herself."

She was just the sort of character Hirschfeld loved to draw. The kind, according to one report of a February 4, 1961 performance in New York City for which the Forty-first Street Theatre was full despite a snowstorm outside. In its review, Time magazine crowed: "If there's anyone who can make you forget about 17.4 inches of snow, it's Elsa Lanchester...even if you have to use dog sleds, skis or bulldozers, drop in on Elsa. She won't let you down." She was quoted in The Diplomat magazine saying "The audiences don't know what I'm going to do when I first come on. They think of me as Mrs. Charles Laughton and expect me to read the Bible. Instead, they get 'Songs for a Shuttered Parlor.'" She had commissioned Hirschfeld for this drawing to use in advertisements, and it was natural to put on the cover when a recording of her show was made in 1961.