Album of the Week: The Boys From Syracuse 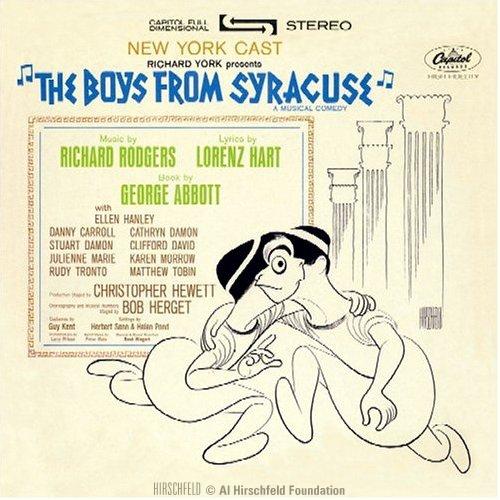 This week's album is a distinctive drawing that was at least twenty five years in the making. For the original production of Rodgers and Hart's musical adaptation of Shakespeare, The Boys From Syracuse, in 1938 Hirschfeld drew an remarkable visual trick, combining the heads of Teddy Hart and Jimmy Savo into one that serves both. Not only is it a great optical illusion, but it also a sly metaphor of this comedy of mistaken identities of both servants and masters. (don't forget to look at his unusual signature.)

For the 1963 revival, Hirschfeld revisited this optical trick and subtracted the distinct personalities of Hart and Savo and put in more generic heads that accomplished the same effect. A year later he was use the same approach in his "Unlikely Casting" series in which he put Robert Preston and Sammy Davis Jr. in an imaginary production of the show.

The 1963 drawing was later used on both the Off-Broadway cast album and the London cast recording. It has been reproduced in countless textbooks over the years as a test of visual cognition.

Tags:
album of the week
Boys From Syracuse
Rodgers and Hart