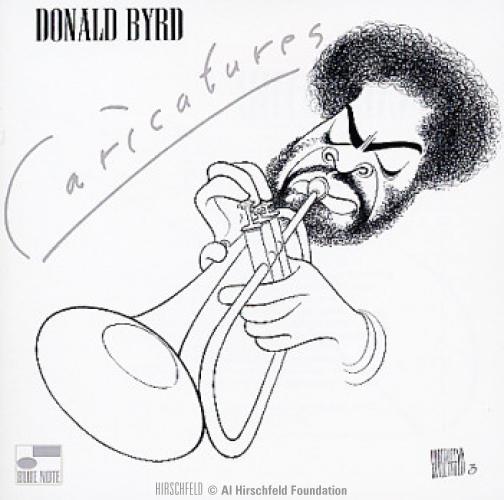 We’ve been working on a big jazz project for St. Louis next year so we’ve been spending time with lots of Hirschfeld drawings of jazz players. One of our favorites is this wonderful drawing of trumpeter Donald Byrd for his appropriately titled album, Caricatures (1976).

Byrd’s remarkable career began before he finished high school when whe performed with Lionel Hampton. After playing in the military band while in the Air Foce he joined Art Blakey’s Jazz messengers as a replacement for Clifford Brown. He became a notable sideman on many classic blue Note Records releases. In the 1970s, when this album was first released, Byrd was pioneering the crossover from hard bebop to a funk/soul/R&B sound that would result in several hit records.

Byrd is an also Afro-American history scholar and connoisseur of African Art. After studying composition in Europe in 1963, Byrd began a career in black music education, teaching at Rutgers, the Hampton Institute, Howard University, and (after receiving a law degree, 1976) North Carolina Central University; in 1982 he was awarded a doctorate by Columbia Teachers College.