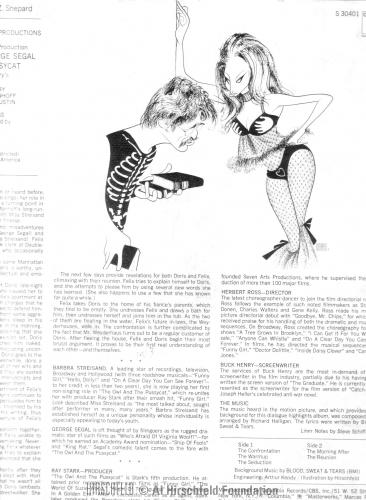 This week’s album features little music and is not a cover, but is a wonderful Hirschfeld nonetheless. In 1962, Hirschfeld had attended the audition for his friend Harold Rome’s new musical, I Can Get it For You Wholesale and remembered a young woman who came out on stage trailing paper and squinting in the darkness of the empty house. She seemed to be all thumbs until she opened her mouth and everyone knew right away she was a talent. He was there when Barbra Streisand’s star was born.

She followed with Funny Girl and later starred in the film version. Her star burned so brightly that when Hello Dolly was filmed, Barbra was picked for the lead over Carol Channing, who owned the role on stage.

From her first non-singing film role in 1970, she appeared in Buck Henry’s adaptation of the Broadway hit, The Owl and the Pussycat. She played a prostitute who is thrown out of her apartment when the struggling writer downstairs, George Segal, complains of the noise. The story of how this odd couple eventually becomes lovers is the plot of the film. Barbra showed she had great comedic chops, even when she did not sing.

Hirschfeld had drawn all of her significant roles at this point, and it is not surprising that Columbia asked him for a drawing for an album of selected dialogue from the film and snippets of music by Blood, Sweat and Tears. The two-handed negligee that she famously wore in the film in a scene where Segal’s character tries to scare the hiccups our of Streisand by donning a skeleton costume was immortalized in Hirschfeld’s drawing.