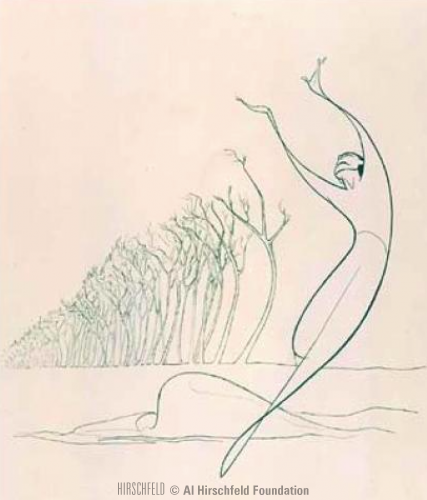 This year is historic in many ways for Al Hirschfeld. In May, we will open the biggest, and what we hope will be the best, retrospective of Hirschfeld art ever at the New York Historical Society. “The Hirschfeld Century: The Art of Al Hirschfeld” gathers together some of Hirschfeld’s greatest drawings including cast drawings of Fiddler on the Roof, West Side Story, The Music Man, and Long Day’s Journey Into Night, and covers his career from his pre-caricature days at Selznick Pictures in the early 1920s to his last works in theater, film, television, music and dance in 2002. The exhibition opens May 22nd in New York and runs through October 12th. We will keep you up to date on activities and programs connected to the exhibition that will happen both at the Historical Society and at venues around New York.

For those who cant make it to New York (and even the ones that can), Alfred A. Knopf will be publishing the first in-depth study of Hirschfeld’s art to coincide with the opening of the exhibition. “The Hirschfeld Century: A Portrait of The Artist and His Age” is a comprehensive look at Hirschfeld’s career. Written by our own David Leopold who has studied the work for more than 25 years, it examines each decade through drawings, paintings and prints to provide their history as well as insight into Hirschfeld’s intent and approaches for a better understanding of what Hirschfeld accomplished and its impact. There will be many illustrations including old favorites and works you have never seen before. Information will be forthcoming on pre-orders and signed copies.

We have over 5,000 images online, and soon more will be there. We have digitized virtually every newspaper drawing covering 76 years of work, and while a number of them are already on our site, soon you will be able to see all of them.

There will be more unveiled throughout the year, but rest assured if you like Hirschfeld, in 2015 you will be able to see more then ever before.

2015 also marks a number of anniversaries in Hirschfeld history.

• 90 years since his first published caricature

• 80 years since he first drew the Marx Brothers which confirmed to Hirschfeld that his work was successful. Performers literally "began to look like my drawings as opposed to the other way around."

• 70 years since Nina was born

• 60 years since drawing Julie Andrews for the first time in The Boyfriend. It is the first of fifty-four drawings, the most of any female performer.

• 50 years since the New York Times, after commissioning work for nearly forty years, finally asked for a drawing of a film, Ship of Fools.

• 20 years since Hirschfeld was the subject of the first CD-ROM dedicated to a living artist.

• 10 years since a trio of simultaneous exhibitions in London featured more than 200 pieces of Hirschfeld artwork.